We Help You To Do More

Our distinctive blend of innovation and experience has enabled Esprit Automation to move from a university-based research project in 1986 to the leading British manufacturer of CNC cutting machines. We deliver machines that are built to last with exceptional quality, first-class service support, engineering expertise, and the flexibility to meet our customers needs. All Esprit machines are 100% British-made and we installed over 1500 cutting machines in more than 30 countries worldwide.

Experts At Everything We Do 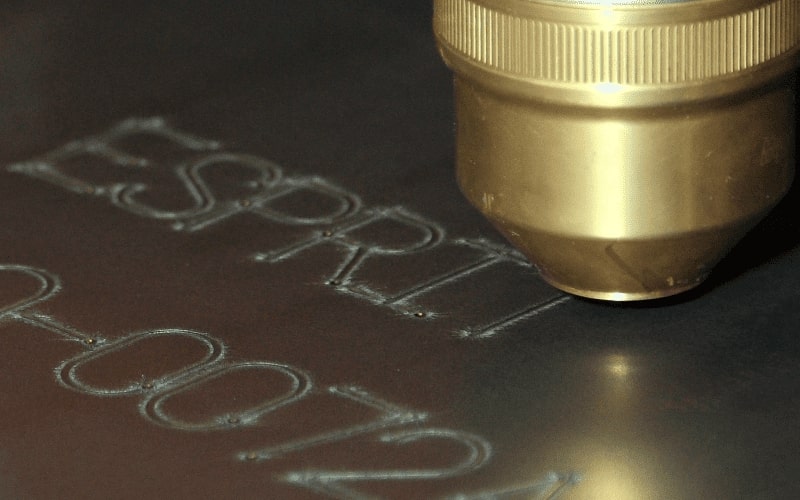 Since the creation of Esprit more than 30 years ago, our vision has been to empower our customers to do more with our innovation in products and services.

Minimizing the operational downtime of your machines and offering fast and efficient service when needed have always been key elements of the Esprit brand.

In 1990, Esprit Automation selected Hypertherm as its exclusive partner for plasma cutting systems; years on, the relationship is as strong as ever and the two companies work closely together to develop more tightly integrated solutions to achieve higher levels of precision, better cut quality, improved reliability, and lower running costs.

Our design engineers work closely with the Hypertherm team to ensure our CNC plasma cutting machines are always at the forefront of technology. In fact, Hypertherm even uses our Lightning HD Esprit machines in their European Demonstration Center in Rosendaal, the Netherlands, to perform demonstrations and cutting examples for customers. 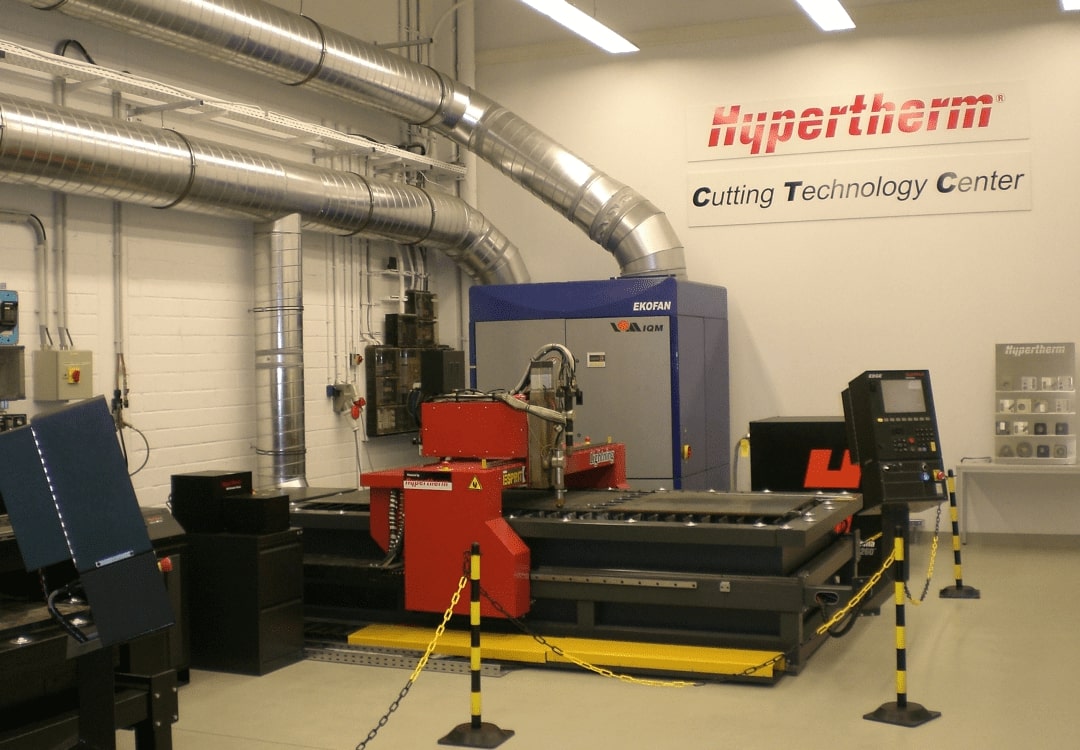 Esprit Automation was founded by Geoff Smith and Andrew Cooke in 1986 following successful research and development work conducted whilst studying Engineering at the University of Nottingham. Initially, the business was established in Nottingham City Council

Established in Lenton, Nottingham, and initially supported by The Prince’s Youth Business Trust and the Department of Trade and Industry’s Support for Innovation scheme, Esprit Automation’s first steps broke new ground. the potential to streamline the emerging plasma-cutting process, Geoff and Andrew developed a revolutionary CAD/CAM system using a Windows/mouse interface. They named this system Procut 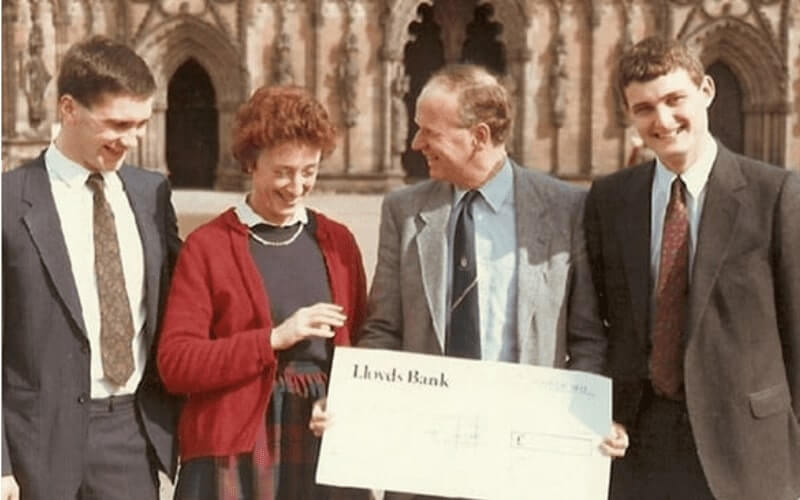 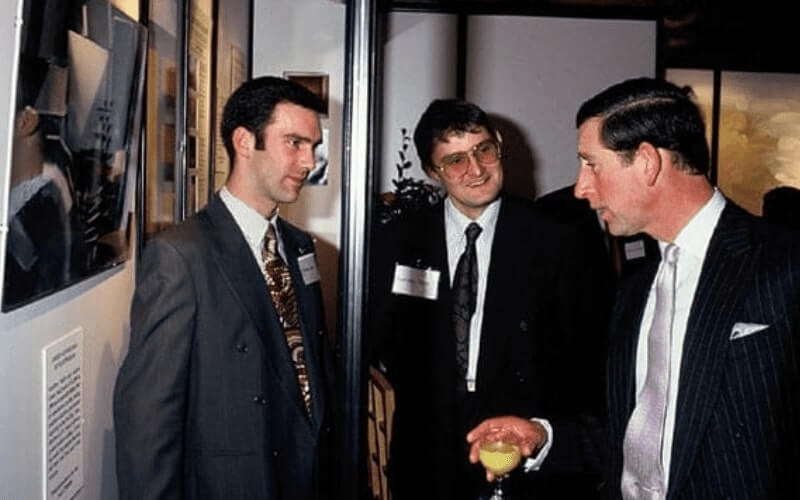 One year later, in 1987, Esprit Automation launched on the  and began upgrading existing operational cutting machines with Procut’s trailblazing technology.

The year 1988 saw the birth of the Lightning range of plasma cutting machines, and by the early 1990s Esprit had begun exporting internationally, to countries including Singapore, Malaysia, Portugal. Demand grew, and with it so did Esprit, moving to larger premises in Long Eaton, Nottingham, in 1991.

Amidst fierce competition, Hypertherm was chosen to be Esprit’s exclusive supplier of plasma cutting systems, forming a close partnership that continues to the present day.

A year after the move in 1992, Esprit launched the Lightning H plasma cutting machine with great success. The Lightning H lived up to its name, with its options for multiple plasma and gas torches providing lightning speed and productivity previously unseen in the market. Shortly after, it was joined by the Lightning D, a light fabrication and ductwork machine. 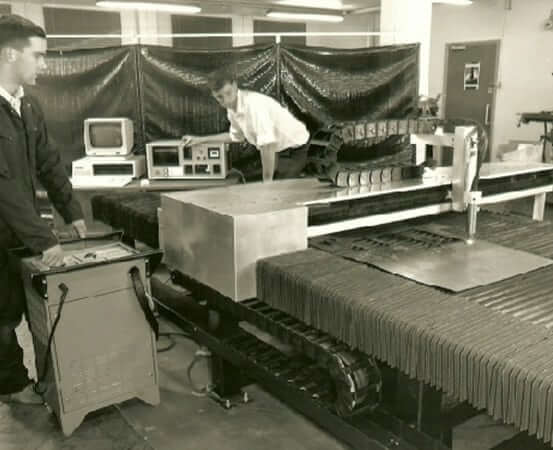 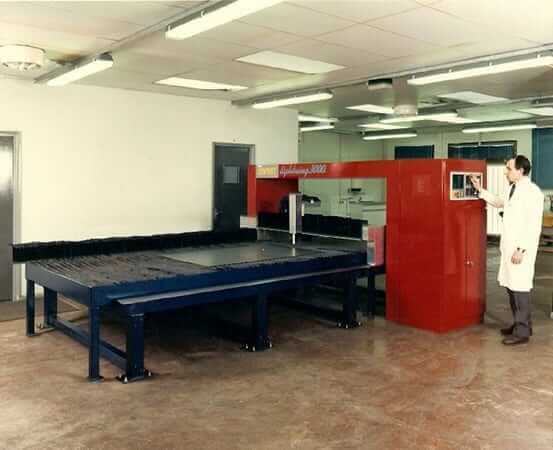 With the introduction of the high-definition plasma cutting process in 1995, the landscape of plasma cutting evolved dramatically. Rising to meet the challenge, Esprit unveiled the Lightning HD.

A revolutionary high-definition machine, the Lightning HD immediately took the market by storm. With its high speed, acceleration, rigidity, and smooth, precise motion control, it became the benchmark for precision plasma-cutting tables – a position the latest generation of the machine still holds in the present day. 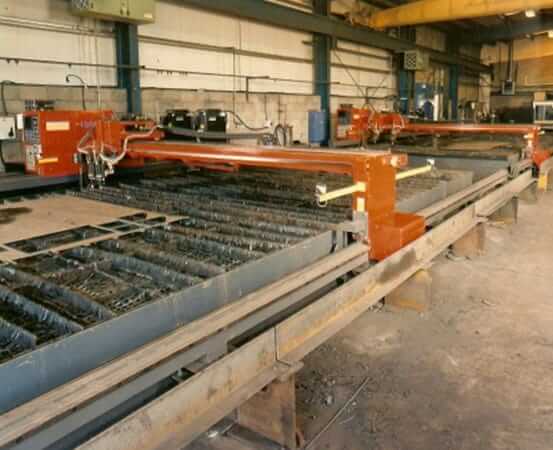 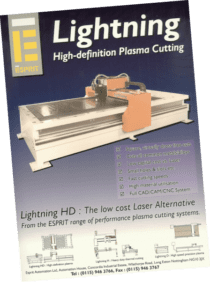 The following year in 1999, Esprit launched the Arrow, designed specifically for the HVAC and sheet metal industries. Launched to immediate success, the Arrow’s enduring popularity has seen it installed in every corner of the globe.

2000 saw the launch of the Viper. Created for resilience in the most demanding environments, the heavy-duty workhouse was designed to run without pause – and without sacrifice in quality. Fittingly, the first-ever Viper is still in operation to this very day! 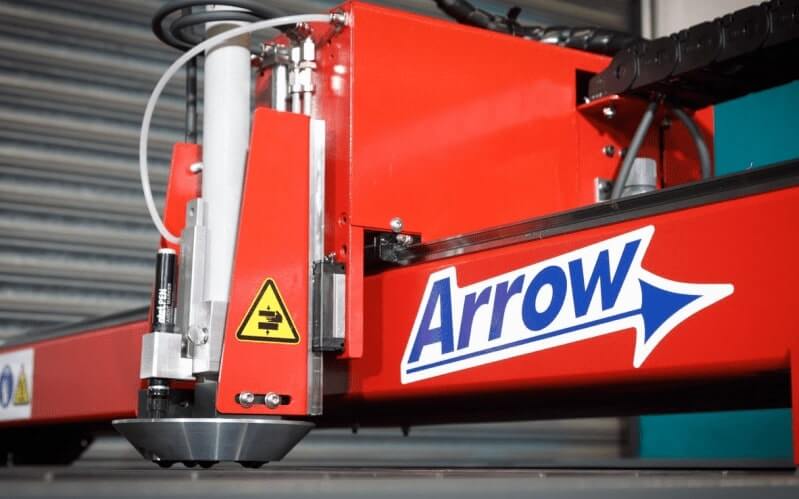 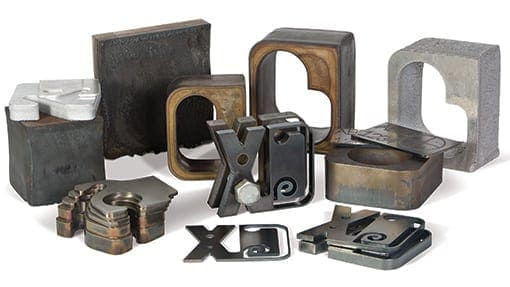 Three years later in 2003, the Cobra was added to the line, making precision plasma-cutting and flexible gas-cutting accessible to workshops of all sizes and scales.

The highly successful Lightning range saw a new addition in 2011 with the launch of the Lightning S, adding the flexibility of multiple plasma and gas torches to the range’s signature speed and precision.

The strong platform of the heavy-duty Viper gave rise to another innovation in 2013, with the introduction of the . With a precision plasma bevel head and Hypertherm True Bevel technology, the Multibevel’s accurate bevel cutting for countersink holes and edge weld preps has made it essential in its industry. 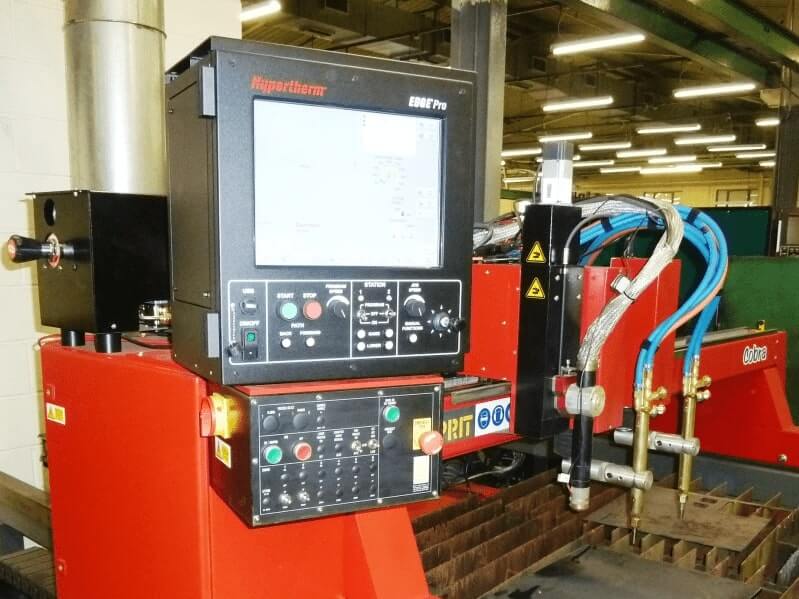 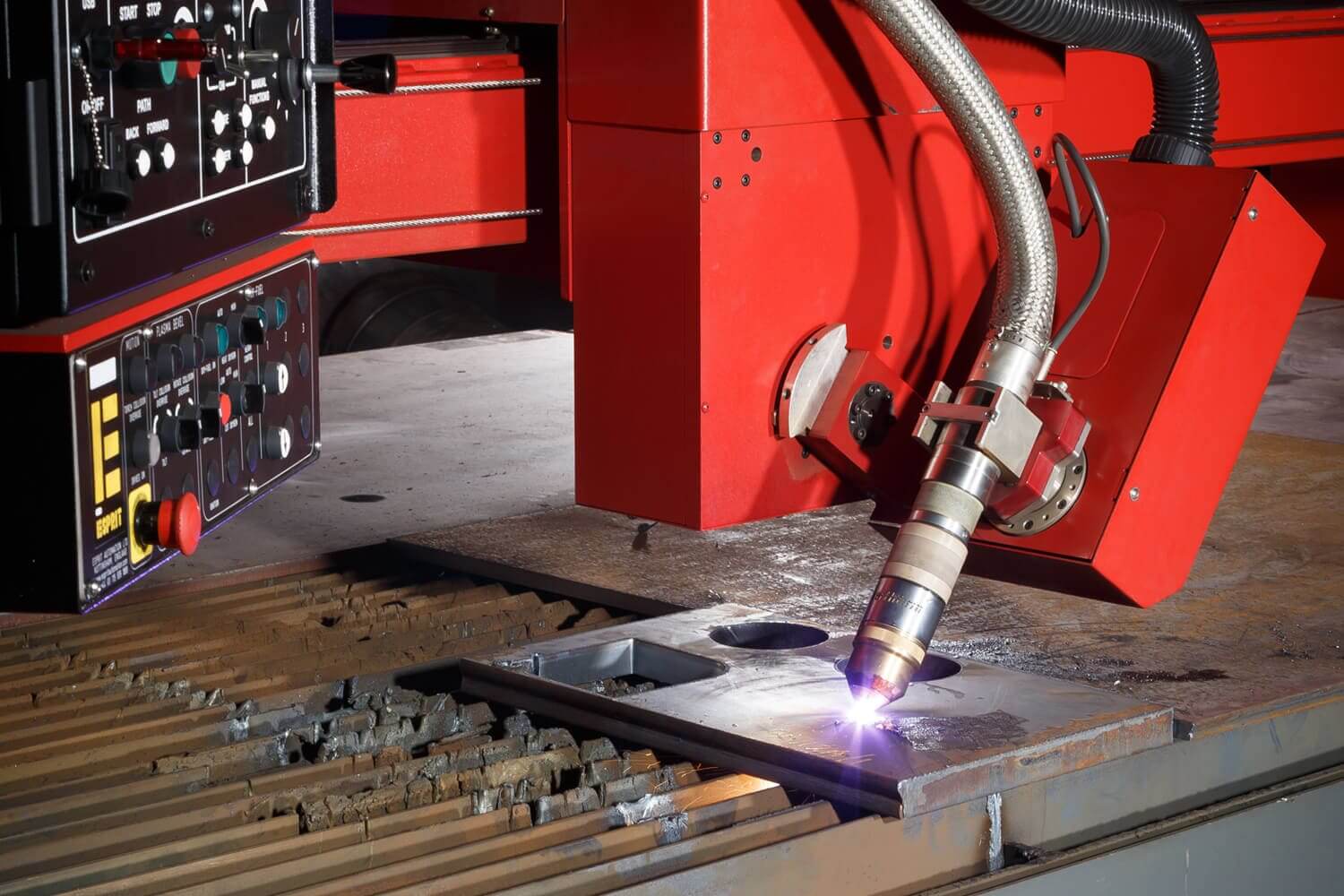 Esprit machines are built to downtime, but on the rare occasion there is an issue, the solution must be swift. Unsatisfied with “on-demand” remote access to diagnose problems after the event, Esprit’s dedication to downtime inspired the birth of a revolutionary in-house solution. This solution is IRIS – a ground-breaking system monitoring your Esprit cutting machine in real time.

Launched at MACH 2018, IRIS’s digital dashboard provides an insight into real-time operations, providing not only a significant increase in uptime through machine , consumable life, and overall machine health tracking; but also improved performance, reliability, and durability. 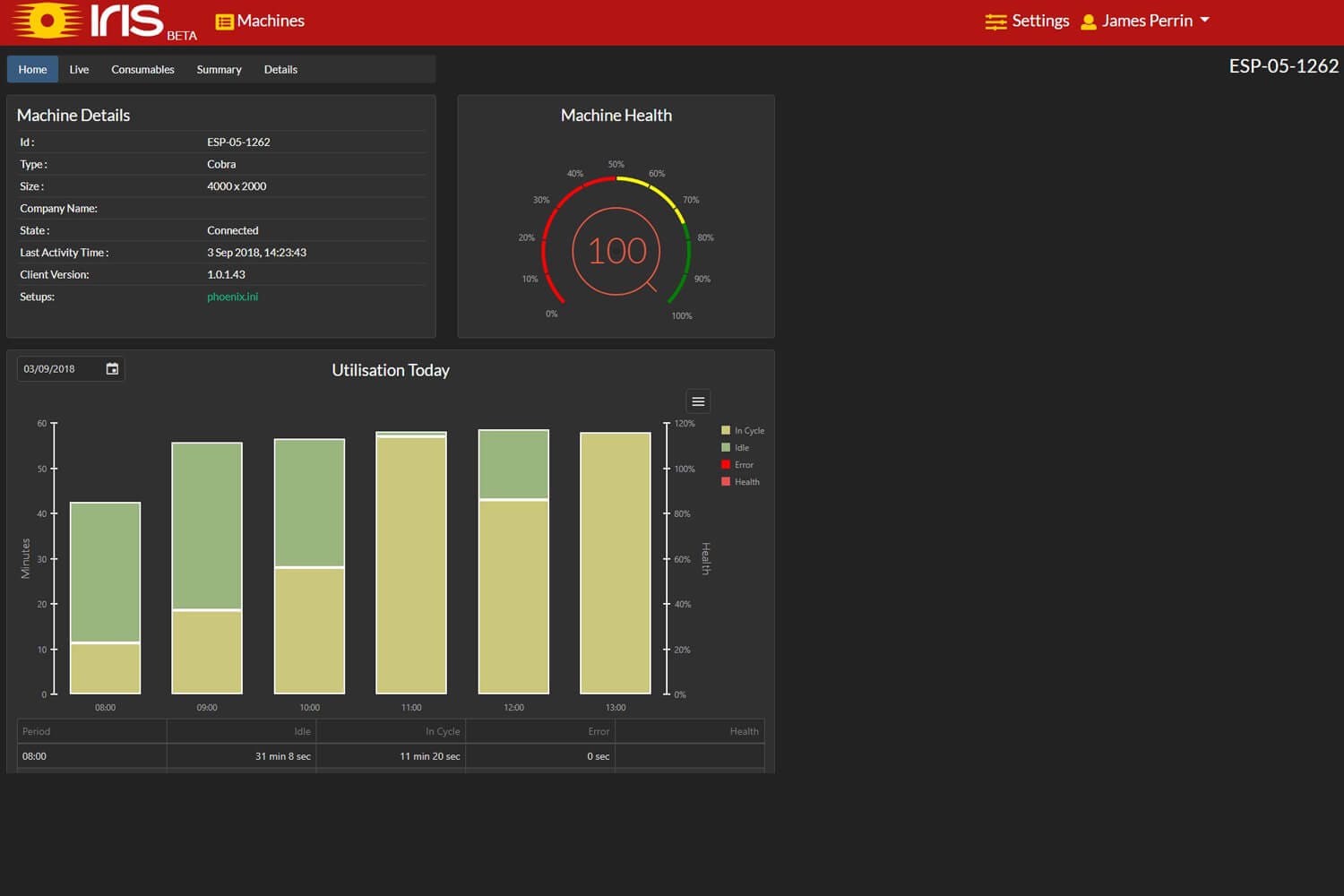 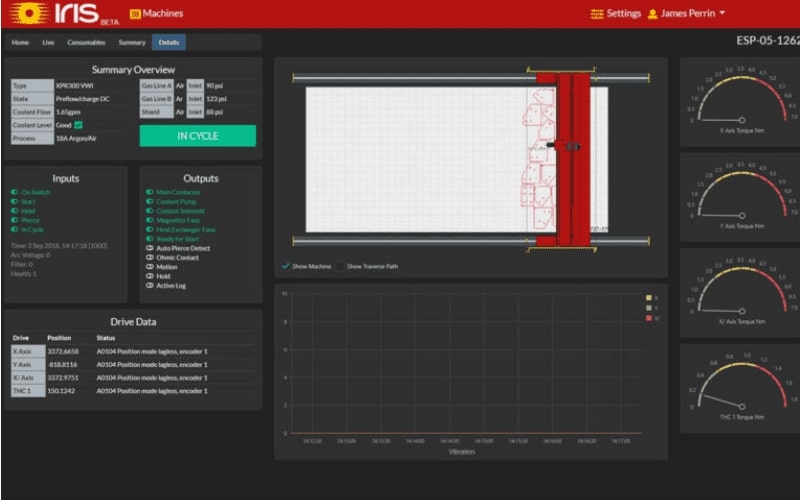 Today, with over 1500 Esprit machines installed in over 30 countries around the world, Esprit continues to push the boundaries of plasma cutting technology, with key partnerships with Hypertherm, Bosch, THK, and other valuable partners.

From machines that lead the industry in speed, precision, and durability to reliable first-class customer support, Esprit has one goal: to enable you to do more. 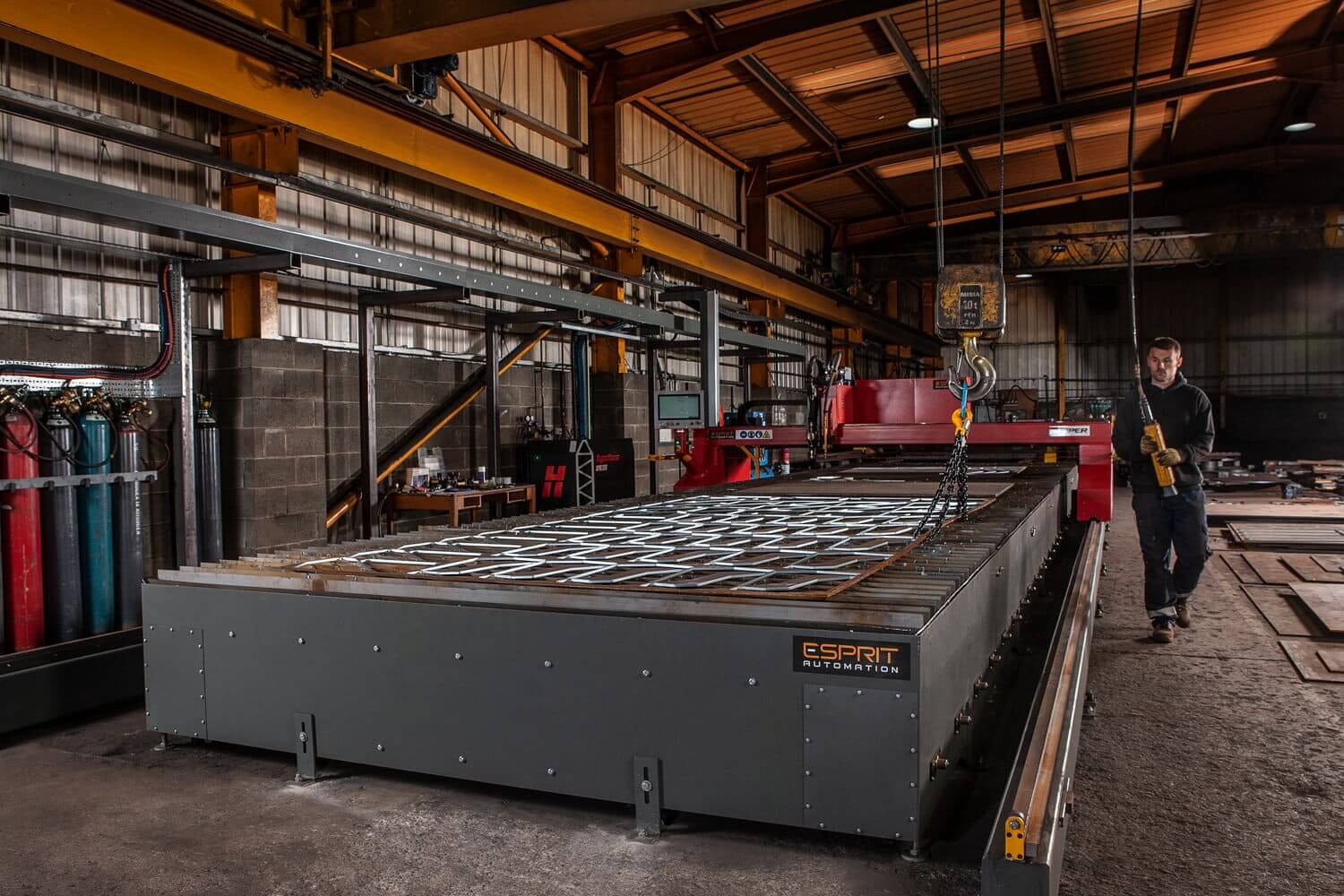 CONTACT US For all your questions you have on Esprit Automation. 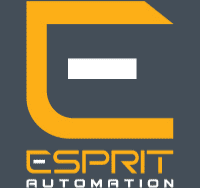 Esprit Automation designs and manufactures state-of-the-art CNC cutting machines for plasma, laser and flame cutting of steel and other metals.

Open chat
Powered by
Hi,
I'm a bot, but if you'd like to speak to a real person, please leave a message in this chat. Someone from our team will be with you shortly.